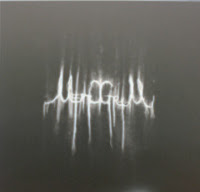 Lately there's been a huge amount of low profile bands whose names consist on symbols or a combination of symbols and letters. Most of them they share a love for dark sounds, scary synths and heavily processed vocals and they are influenced by dark dubstep and hip hop as much as they are by gothic and post punk sounds. After the rise of Salem, Burial or even Fever Ray in the last years the door's been open for this type of effects and many projects are flirting with a kind of music would perfectly suit the goriest and darker of the films and scare the bravest of the mums.
GR†LL GR†LL is yet another band who's just released a CDR on Disaro, a record label whose bands include another hieroglyphical bands such as