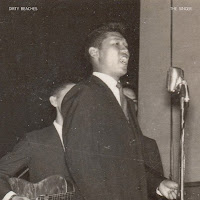 Soft Power is a Scottish record shop famously known for the fact they only sell vinyl (as all the record shops should be) that last year also turned into record label with the release of their first reference, an LP by Theoretical Girls. The second reference was finally announced last month and it's going to be a split single by personal favourite Dirty Beaches and Brave Radar's Conor Prendergast. The split single will contain at least three tracks. Dirty Beaches's side will have a Johnny Cash cover of the singer more in the key of Nick Cave's version (well, actually is exactly as Nick Cave's version but as lo-fi as you can expect is going to be a Dirty Beaches track) and also an instrumental track called Gone to Hell Come Friday dedicated to the memory of Broadcast's Trish Keena