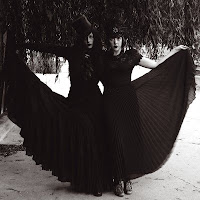 Austra is the new creature out from the many talents of Katie Stelmanies, a Toronto singer who's been in many projects and released some stuff under her name as well, like the amazing single Believe Me / Crying I reviewed in here a couple of years ago. This week, her new combo, a more electronic and beat oriented version of her solo stuff but still with the spirituality and drama of her previous releases, came to London to perform some shows and present their first release, a 12 inch with three songs that was previously released on Fucked Up's label One Big Science and now is out through Domino in the UK. You can here the three songs on the Domino Soundcloud space in here or get in in one of the many shops Domino gets to.

Austra - Beat & The Pulse by DominoRecordCo