ZOO KID - OUT GETTING RIBS 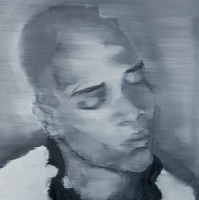 Zoo Kid makes us think, we that are far away from our youthful years, that we through away the best years of our lives. How can a 16 year old make songs like this? Has he been making music since he was 2 to get to this level of composition abstraction and sophistication and make it sound natural and innate? (The credits praise written, performed and produced by Archy Marshall)
His song Out Getting Ribs has already been praised around but the B side to the single, Has This Hit, out on House Anxiety Records and probably soon to be sold out (so you better run) is as big as the A side. He sounds as he's been listening to lots of music (he can sound like Ian Curtis without wanting to sound like him in a time everybody wants to sound like him but fail trying) and filtered everything in a way it only ends up sounding as himself. It's definitely a one to follow from really close in the British scene in a time there's not much interesting going on here.