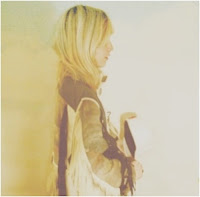 Last year I posted about Computer's Magic first digital single, the melancholic and beautiful On VHS. Since then, she's released three free to download EPS (still available for download on her website) I couldn't recommend enough. So it was just a question of time a recognized label, this time White Iris (formerly known as Black Iris and guilty of putting out Best Coast's When I'm with You 7 inch), paid attention to her music and gave her the opportunity of having a proper physical release. The tracks on this first 12' are selected songs that previously formed part of those homemade EPs that have been re-recorded more professionally for the occasion. The 12" record has been announced for the 15th of March and no final tracklist has been named yet. If I had to choose between all the tracks I would like to be there, the list would be so long it had to be an LP.
Here you have the final version of Found Out, which originally appeared on her first EP Hiding From Our Time, and will close the 12'.