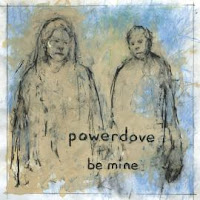 Powerdove is the project of Annie Lewandowski although she frequently performs with Jason Hoopes and Alex Vittum according to her label's website. Although originally from the U.S they are now settled in the UK and I happened to see them live last week without knowing anything about them. In that occasion, they were just two on stage: She was playing a small guitar while the other guy, who I think it was Alex, was making background noises, ambient sounds and beautifully crafted percussions with a strange tool connected to a laptop. Although it was the first band out of three (everybody was there to see Former Ghosts) and we know the attention that guest bands receive in general, the audience remained quiet for the whole set, hypnotized by the haunting voice and the delicate melodies coming out from the stage. Then, after the show I found out they already have a self-titled EP and their first album, recorded by Deerhoof's John Dieterich, has just been released on the same label, the Portland based Circle Into Square. Both records are a delicate collection of folk-pop songs, most of the times as slow as Low's first records used to be, and as delicate as Picastro or Piano Magic's ballads. But,although the recording is really good, I really recommend to see them live to get the whole idea of their current sound as the recording of the album is a year old and more organic and I think that, thanks to that weird machine that captivated me, they're slightly evolving and mutating the songs with loops and other electronic details not as evident in the album as they are live, or that's just maybe because as they just were two, they tried to fill the songs with what had available. We'll have to wait to anther recording to find out.