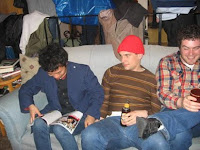 Meth Teeth came along after the frustration of Mattey, a guy from Portland, that was fed up of the bad endings of his previous bands, so he started a project of his own. At the beginning Meth Teeth was an acoustic project, mostly focused on folk and americana music with guitar, violin and piano. Listening to their current sound this is hard to imagine although the roots sound is still there. Then his friend Kyle, now an official member, approached him and they started to change the sound of those songs adding a lot of distortion and punk attitude. And that's how they started to develope into what they are today and what we could hear in their first 7" on Sweet Rod Records, which has sadly been long deleted. Two months ago they published their first proper LP, after a cassette on Ick Ick Records, this time for Woodsist which have made them incresingly popular thanks to the notoriety of this label. And look out for a future release in Sacred Bones, a double 7" with Christmas Island anytime soon. here you have a song included in both their first single and album for you to enjoy.