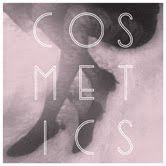 Cosmetics duo from Vancouver surprised us some months ago with a techno-goth ballad called Soft Skin, the A side of their first 7". Now they came back with another killer tune, more upbeat and less dark than their first single, but sharing the same sexy whispering vocals from Aja. The single comes with a new B side called You can get the single from this week straight from the web of Captured Tracks, just by itself or as part of one of these deals they frequently do when putting out some releases at the same time, this time together with the new singles from Minks, The Soft Moon and Hanoi Janes.
They already recorded their first LP that will come out after Summer as well on Captured Tracks and they also uploaded a video for Soft Skin, as glamorous as it is kitsch and slightly creepy, that you can watch over here.