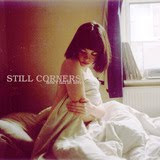 Still Corners is a London band I sadly missed when they were playing the Shoreditch 1,2,3,4 Festival last Saturday as they were the first band who opened the New Bands stage. Anyway, I'll definitely go to check them out for the single launch party next August 20th to celebrate the release of their first single, the incredibly beautiful Don't Fall in Love, that will be out on The Great Pop Supplement, the 7 inch specialist label that puts a lot of effort releasing great singles on beautifully designed artwork.
The songs of Still Corners drink from shoegaze, dream pop and silky vocals. Don't Fall in Love and its B side Wish are already between my favourite songs of the season and they can work as a British less synth based answer to Memoryhouse. Go to hear them on their Myspace. While we wait for this release, next week Fierce Panda puts out a compilation called Gruff Trade that includes one of their songs, Endless Summer, that has that beautiful drum intro we've heard thousands of times in songs like The Ronettes' Be My Baby, JAMC's Just Like Honey, Bat For Lashes' What's a Girl to Do and so on and, although it's been used on many occasions, I could never be tired of hearing it.