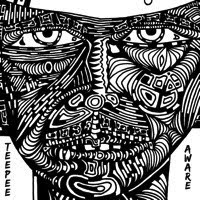 This 7 inch has been out already for a while so it won't be news for many people I suppose but i discovered it not long ago and finally managed to get a copy last week after browsing online as it's sold out on the record label page, the Chicago based Weird Hug Records. TeePee, is Eric Lopez from Miami who's been releasing Tapes, CDRs and a couple of 7's so far, practices the kind of music you never think somebody from Miami would do, from the point of view of somebody who's never been there and has a stereotyped idea of sun, Cuban sounds, breast implants and Hawaiian shirts movies has sold us. His songs are full of fuzz and feedback, particularly slowed down and with crawling melodies in this single. The T side is So Sure That I, a song about marrying and killing someone that is dark and spacey, while Mbiso, the P side, is a bit more upbeat. Both songs though, share exactly the same guitar drone on the background being like a trademark for the EP. Check for some other available stuff he has, all of them sharing this drone punk with drum machines Lo-Fi spirit and wait for the release of his debut album anytime soon in his new formed label Senzei Records where he's also going to publish other bands around the Miami area.

TeePee - So Sure That I.mp3