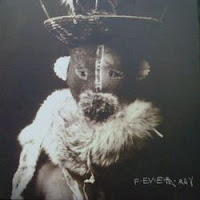 Don't think I need to introduce Fever Ray to anyone by now as it's been one of the most commented artists of the last months, since her first record out of The Knife was published. That's why I'm just going to limit myself to talk about this limited 7 inch record it just came out exclusively on Rough Trade last Monday. Originally only available to fanclub members or on tour you can now get one of the 100 copies they have between their two shops or at the shop online. It consists of two cover versions of Nick Cave's Stranger Than Kindness and Vashti Bunyan's Here Before. Although both songs are a bit mysterious and spooky when performed by the original artists here they get to new limits of strangeness and obscurity because of her voice and the arrangements of Van Rivers and The Subliminal Kid that, although they are also present in some tracks of her album, they are introduced here as full members of the project appearing on the cover as active performers of the two songs. I particularly prefer the Vashti Bunyan attempt as it travels from the pastoral landscapes to a completely new territory of sampled voices and electronic arrangements that makes you forget this is not an original and let's not forget that the main reason for a cover should be about this.

I love you blog. Do you have the other song from this 7 inch?

Hi. Thanks for your comment. I have the song on the record. Didn't rip it to the computer, sorry.

would you please rip it? i'd love to have it :)

can you please put the nick cave cover up please...

Both these tracks are now on spotify!