THE PAINS OF BEING PURE AT HEART - SAY NO TO LOVE 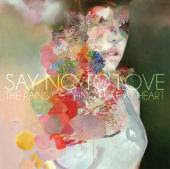 You'll probably know by now that The Pains of Being Pure at Heart are back with a new single that came out yesterday on their label Slumberland Records. The two song 7 inch Say No to Love / Lost Saint comes after another great non-album tracks single Higher than the Stars that was out last Autumn. No news if any of these two songs will form part of a new album or, as it was tradition at the beginning of the 90s in the UK when some great artists put out numerous non-album EPs, period that the Pains take inspiration from, these songs will remain only available under this format.
The two new songs are not far from what they've been offering until now and although not up there with my personal favourites, they still have some great tunes to offer.

Labels: Slumberland, The Pains Of Being Pure At Heart

Interesting, I'm gonna look more information about artist of england, I never try that music, thanks for share.