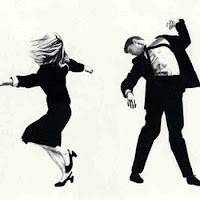 Pitchfork did it again. They are faster and more than me so they posted about this single before I did, because I was trying to find information about them online, which has been an impossible mission, even for them. They just got that Cults are a duo (boy and girl) from New York. Mystery is a plus these days of overinformation and easy access where everybody with software has a band and a public way of exposing themselves to the world thanks to Myspace which they actually have avoid so far.
And who needs more if the music speaks for themselves. The three songs on this free download single, listed as a future 7" to be released on the 23rd of December 2012 (and you can believe it or not) are pop gems that like to look back to the 60s but also to everything's been in between then and now, from girl bands to twee pop. Although the main track stands out thanks to his catchy sing along chorus and arrangements the three tracks are evocative and really good songs and they are free so pop up here to get them while we wait to know more about them.